The Poor People’s Campaign: A National Call for Moral Revival, of which Dr. Liz Theoharis and Dr. William Barber are National Co-Chairs, does not just commemorate the 50th anniversary of Dr. King’s Poor People’s Campaign; it is a New Poor People’s Campaign for today. Never has such a Campaign been more needed. And the Co-Chairs are eminently qualified to make this a national and historic movement. The Rev. Dr. Barber, who wrote the Foreword to Theoharis’ book, comes from the North Carolina NAACP where he created a multi-racial, multi-ethnic, multi-everything movement of the poor in their own interest. The Rev. Dr. Theoharis has spent the last two decades of her life organizing among the poor in the United States and worldwide. Together, they have travelled through more than 20 states, organizing among the poor. 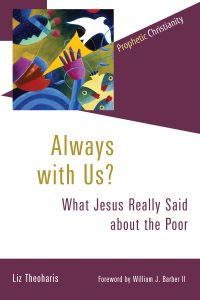 Dr. Theoharis’ book Always with Us? What Jesus Really Said about the Poor is a timely, persuasive, eminently readable, and even inspiring appeal to end poverty forever. Starting with Jesus’ words, “The poor you will always have with you” (Matthew 26:11), Theoharis shows that this quote is regularly used as proof that the Bible says that it is impossible to end poverty. Step by step, she shows that the quote means exactly the opposite: that Jesus’ intent was for us to do God’s work by ending poverty completely.

She begins by pointing out that Jesus himself was poor and homeless, almost certainly illiterate, and a representative of the poor in his time. She places the quote from Matthew in its full context (Matthew 26: 6-13) and then shows its interrelation with Deuteronomy 15: 1-11, which outlines God’s laws for the elimination of debt and poverty. “There need be no poor people among you. … I command you to be openhanded toward your fellow Israelites who are poor and needy in your land.” These commandments, which Jesus quotes, are to forgive debts, release slaves, and lend money even when the lender knows he or she will never be repaid. Deuteronomy says that since these commandments will not be followed, there will be poor among you. Jesus is reminding the disciples that God hates poverty and commands them to end it. “Therefore,” concludes Theoharis, “the passage is a critique of empire, charity and inequality, rather than stating that poverty is unavoidable and predetermined by God.”

The contextual analysis that Theoharis employs also shows that during the dinner at which Jesus utters these words (not the Last Supper), an unnamed woman anoints him with expensive oil. It was at that point in the Bible that Jesus was anointed the Christ, the Messiah. There is no other place in the Bible where these words are used. This emphasizes the centrality of the Matthew scripture.

Theoharis devotes an entire chapter, entitled “Reading the Bible with the Poor,” to show how she puts Jesus’ teaching in Matthew 26 into action by describing a Bible study among grassroots antipoverty leaders from across the country she helped organize in 2009. In this central chapter, which is really the core of the book, she outlines the entire process of contextual Bible study. She explains that the Bible study is not only a lesson in the interpretation of scripture, but also an organizing tool, educating and empowering the participants to follow Jesus by working to end poverty. The poor read the Bible themselves and interpret the scriptures. The students, called Poverty Scholars, wound up identifying with the disciples and the challenges they faced. They compared the disciples’ work to the community organizing they themselves are doing among the poor. But more than this, the Poverty Scholars shaped the methodological and contextual aspects of the study of the Bible. Theoharis outlines their contributions in identifying what poverty means, who the poor are, and in connecting the scriptures from Matthew and Deuteronomy. They present a searching consideration of the unnamed woman who anoints Jesus at this dinner, feasting in the house of the poor, as described in Matthew, and of the setting in which the dinner takes place. Their contributions were a central source for Theoharis’ presentation of the deeper meaning of what Jesus experienced and what he said.

Theoharis also provides a historical analysis of empire in Jesus’ time. The Roman Empire, ruled by Caesar, had myriad clients, one of which was Herod, who ruled over Galilee and surrounding areas, oppressing and exploiting the people. Herod was, of course, beholden to Caesar. The parallels with current-day empire, wealth and oppression – and the creation and perpetuation of poverty – are clear. She points out that while the poor make history, it is the rulers – the rich and powerful – who write history. This is why it is so important that the poor themselves read, study and interpret the scriptures for themselves. The real meaning of the scriptures and of Jesus’ ministry is a powerful tool for those working to eliminate poverty.

The book draws on the teachings of Dr. Martin Luther King as well. Theoharis begins a chapter with a quote from Dr. King: “True compassion is more than flinging a coin to a beggar. It comes to see that an edifice which produces beggars needs restructuring.” In other words, as she emphasizes throughout the book, charitable giving is insufficient. The essence of God’s work is to end poverty and this requires the crucial insight that for this goal to be achieved, society needs to be restructured. This is the central economic content of Jesus’ words and teaching, Theoharis suggests.

The final chapter is summed up in its title, “Christ, the Social-Movement Leader.” Jesus, poor himself, was anointed the Christ in a poor man’s home by an unnamed woman specifically because he did minister not just “to the poor,” but “with the poor.” His ministry was to build a society to carry out God’s commandment to end poverty. For that, he was crucified: the death sentence reserved for revolutionaries.

Dr. Theoharis has presented a compelling argument for a New Poor People’s Campaign to continue the work to end poverty. This inspiring work is not only an important theological addition to the literature, but an important tool for those in the trenches today, working to end poverty and to change society. Her description of the organizing work to empower the Poverty Scholars is an especially important contribution. There is no question that the movement has important spiritual and moral components. This book outlines the importance and centrality of morality and spirituality and is for everyone. While the teachings of the book are Christian, the lessons it contains are not only accessible, but applicable to all.

Digital Capital Is Still Capital, And There Is Nothing About It That Marx Would Enjoy